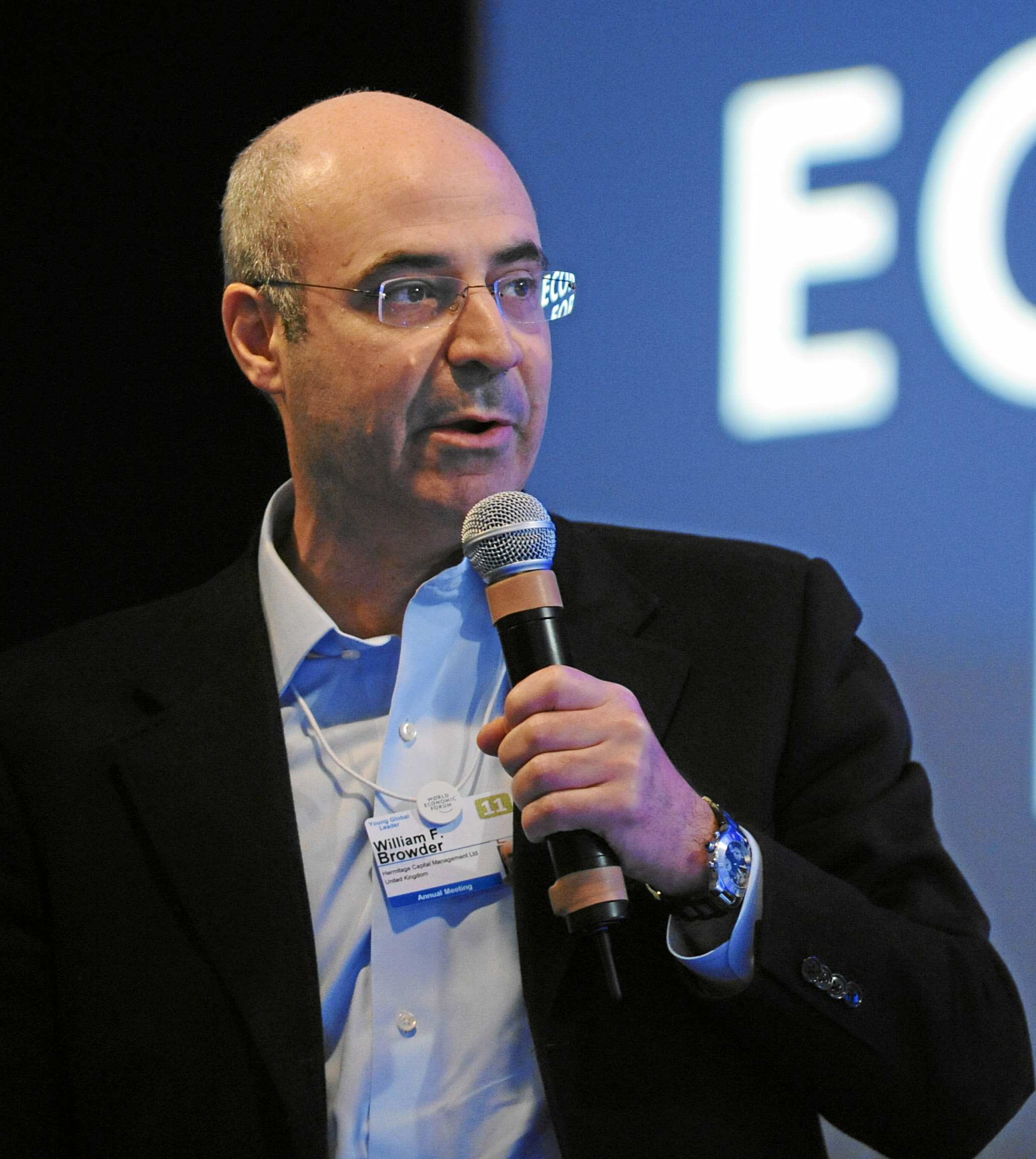 William Felix Browder (born 23 April 1964) is an American-born British financier and political activist. He is the CEO and co-founder of Hermitage Capital Management, the investment advisor to the Hermitage Fund, which at one time was the largest foreign portfolio investor in Russia. The Hermitage Fund was started in partnership with Republic National Bank, with $25 million in seed capital. The fund, and associated accounts, eventually grew to $4.5 billion of assets under management. In 1997, the Hermitage Fund was the best-performing fund in the world, up 238%. The primary investment strategy of Browder was shareholder rights activism. Browder took on large Russian companies such as Gazprom, Surgutneftegaz, Unified Energy Systems, and Sidanco. In retaliation, on November 13, 2005, Browder was refused entry to Russia, deported to the UK, and declared a threat to Russian national security.

Eighteen months after Browder was deported, on June 4, 2007, Hermitage Capital's offices in Moscow were raided by twenty-five officers of Russia's Interior Ministry. Twenty-five more officers raided the Moscow office of Browder's American law firm, Firestone Duncan, seizing the corporate registration documents for Hermitage's investment holding companies. Browder assigned Sergei Magnitsky, head of the tax practice at Firestone Duncan, to investigate the purpose of the raid. He discovered that while those documents were in the custody of the police, they had been used to fraudulently reregister Hermitage's holding companies to the name of an ex-convict.

The reregistration of the Hermitage holding companies was an intermediate step before the perpetrators used those companies to apply for a fraudulent $230 million tax refund, awarded on 24 December, 2007.

In response, in June and October 2008, in testimony to the Russian State Investigative Committee, Magnitsky testified against the perpetrators of the fraud, including the Interior Ministry officials who conducted the raid on Hermitage's offices. Five weeks after his second testimony, on November 24, 2008, Sergei Magnitsky was arrested at his home; among those present at his arrest were officials he had named in his testimony. While he was in custody, Magnitsky was mistreated, and eventually fell gravely ill. The tax auditor began complaining of severe pain in his back in May 2009, and became increasingly ill over the next several months. Medical expert reports that have been carried out in the years since have concluded that for the remainder of his time in pre-trial detention, Magnitsky received inadequate medical care, and may have even been given medication that aggravated his pancreatitis. The court judgement notes that "domestic authorities unreasonably put his life in danger."

After Magnitsky's death, Browder lobbied for Congress to pass the Magnitsky Act, a law to punish Russian human rights violators, which was signed into law in 2012 by President Barack Obama. In 2013, both Magnitsky and Browder were tried in absentia in Russia for tax fraud. Both men—Magnitsky had died four years prior—were convicted and sentenced to imprisonment. Interpol rejected Russian requests to arrest Browder, saying the case was political. In 2014, the European Parliament voted for sanctions against 30 Russians believed complicit in the Magnitsky case; this was the first time it had taken such action.

In July 2017, Browder testified to the U.S. Senate Judiciary Committee on Russia's alleged interference in the 2016 U.S. presidential election.

On October 19, 2017, Canada enacted its own Magnitsky Act, which permits the freezing of assets and the suspension of visas when officials from Russia and other nations are found to be guilty of human rights violations; Canadian firms are prohibited from dealing with foreign nationals who have grossly violated human rights. Other countries including Estonia, Lithuania, and the United Kingdom, have also enacted their own version of the Magnitsky Act.

On October 21, 2017, as part of a criminal conviction for tax evasion, the Russian government attempted to place Browder on Interpol's arrest list. Browder's visa waiver for the United States was automatically suspended. After a protest by U.S. Congressional leaders, his visa waiver was restored the following day. Russia's arrest-warrant request was rejected by Interpol on October 26, 2017. While visiting Spain in May 2018, Browder was arrested by Spanish authorities on a new Russian Interpol warrant and transferred to an undisclosed Spanish police station. He was released two hours later, after Interpol confirmed that this was a political case. Provided by Wikipedia
Showing 1 - 2 of 2 for search: 'Browder, Bill, 1964-', query time: 0.02s
List  Tabulka
Search Tools: Get RSS Feed — Email this Search —